Growing and changing as a counsellor/ psychotherapist

In this blog I want to write about the ways in which counselling practice may evolve, in the hands of a counsellor who has learning as their top value in action, as I have.  In the process I will reflect briefly on my journey through Rational Emotive Behaviour Therapy (REBT). I will also look at the kind of body-mind-environment approach to counselling that came out of my progression.  And I will look at the impact of diet, exercise and sleep on emotional well-being and mental health.

It seems to me that a counsellor could spend their whole career doing pretty much the same thing, in slightly different ways, with a host of clients.  Or they could change and grow on an almost daily basis, ass a result of feedback from their clients; from reading; from detective-ing; and from reflecting on their practice.

My journey began like the former, static model; and then broke apart under several pressures and stresses, into a dynamic journey of innovation and growth.

I began to study Rational therapy (REBT) in 1992, during a career crisis; kept up that study; and then set up in private practice as an REBT coach/counsellors, in November 1998.  At that time I was convinced that REBT was a complete system of therapy, which lacked nothing, and had superseded all other systems of counselling and therapy. (How deluded we can be, even after studying for a Master’s degree!)

But cracks began to appear almost at once.  One of my first three clients could not abide the Disputing process of REBT; and so I always used Gestalt therapy combined with Transactional Analysis (TA) with him.  Another was mainly in need of help with his relationship with his wife – and so I mainly used ideas from Werner Erhard’s Relationship’s Course, and ideas from Dr John Gottman’s system.  And another was mainly interested in business coaching.

However, from time to time, I had a pure REBT client, who I treated to a relatively pure REBT approach.  But not often.

Then, in 2001, I began to study (post-masters) a diploma in counselling, psychology and psychotherapy, involving 13 different systems of counselling and therapy, including Freud and Jung; Rogers and Perls; the existentialists and the behaviourists; the cognitivists and Multimodal therapy; and many more besides.

Many of the fascinating ideas from those systems of therapy crept into my daily counselling practice; diluting my REBT commitment enormously.

But it was not any of this that caused me to begin to move dramatically away from REBT.  No.  It was the fact that I often had clients who seemed to be very depressed, or very anxious, but who could not come up with any real or symbolic losses, failures, threats or dangers, to account for their psychological symptoms.  But they had one thing in common; a swollen belly; red eyes and white tongues; or a tendency to scratch at their crotches.  They each had a problem of gut disbiosis, called Candidiasis, or systemic overgrowth of Candida Albicans in their large intestine.  I recognized these symptoms, because I had wrestled with this condition myself, for a couple of decades by that time.  So I helped them to address their problems with Candida, and their depression and/or anxiety cleared up.  (Recent research suggests that Candida Albicans [and gluten; and stress] can cause a condition called ‘leaky gut’, which allows who molecules of food, or toxic wastes, to pass through the gut wall, and into the bloodstream. This also causes [or co-occurs with] ‘leaky brain’, whereby the blood-brain barrier becomes porous, allowing toxins into the brain, and affecting mood and emotions!)

The human body and mind have always been connected; and understood by some like this: The mind is a function of the body-brain, shaped by cumulative-interpretive social experience.  But it is, of course, also influenced by whatever affects the bodily component: like diet, exercise, sleep, physical illness, etc.

I began to get clients who were stressed, and some of their stress was coming from the actual pressures in their lives.  But some was also coming from their diets.  So I developed a stress and anxiety diet; taught it to some clients; and their stress symptoms cleared up.

Of course, at the same time, I was also attempting various elements of talk therapy; but paying increasing attention to the need to check out the client’s diet; the state of their guts; their use of alcohol and recreational drugs; and so on.  This took me a little beyond the insights of Arnie Lazarus, the creator of Multimodal Therapy, who, strangely – whilst spotting the importance of drugs/biology – overlooked the role of diet and exercise in emotional functioning. 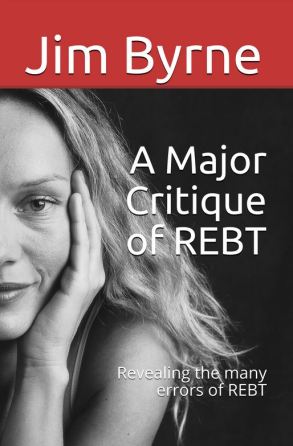 Eventually, all of my accumulated learning became combined with a disillusionment with REBT, especially after 2005-2007, when the Albert Ellis Institute melted into infighting between two factions, the larger of which (rationally/irrationally???) ousted Albert Ellis.

And then I began to reflect more critically on the underlying theory of REBT, and it fell apart in my hands.

I wrote all of this up in a book, which has now been replaced by a reissued critique of REBT, titled A Major Critique of REBT: Revealing the many errors in the foundations of Rational Emotive Behaviour Therapy.***

I then began to write papers on various aspects of counselling and therapy, which built up into the theory of Emotive-Cognitive Embodied Narrative Therapy.

The first book on this subject was titled Holistic Counselling in Practice.***

This book contained two appendices by my wife and professional partner, Renata Taylor-Byrne, and we came to realize that those two pieces of desktop research should not be hidden away in the back of a book; but deserved to be published in their own right.

So we rewrote those two documents, and they became Parts 1 and 2 of a new book.

Part 1 is titled, Diet, nutrition and the implications for anger, anxiety and depression management.

Those two parts help the reader to know how to use diet and exercise to tackle their own anger, anxiety and/or depression; or to help others to do so.

Part 3 is Dr Jim’s Stress and Anxiety Diet, which consists of fifteen pages of advice on specific foods and drinks to avoid, or to consume.

Part 4 looks at the scientific research which looked at the links between nutritional deficiencies and emotional disorders.

Part 5 consists of fifteen pages on how to change any dietary or exercise habit.

The book’s title is this: How to Control Your Anger, Anxiety and Depression: Using nutrition and physical exercise.***

The next move was to try to figure out how to help counsellors who wanted to move in the direction of adding back the body to their counselling clients’ minds. 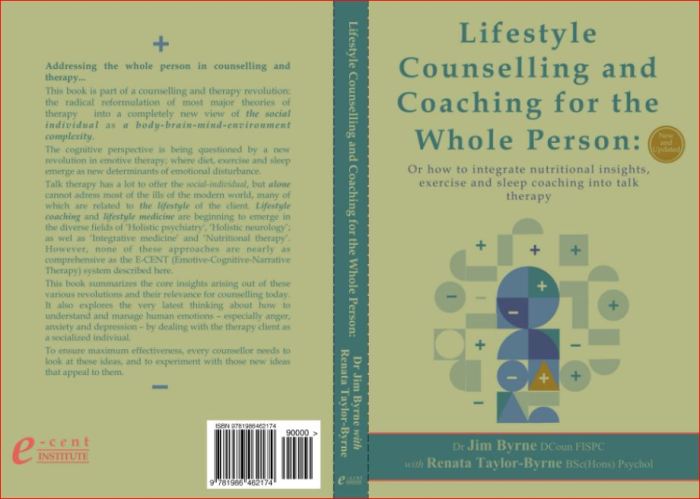 We already had a lot of material on diet and exercise; and so Renata began to research sleep science, books and papers.  And we generated a preliminary book chapter on sleep in relation to emotional stability from that work.

We also had a lot of material on the various historical approaches to understanding the human mind and emotions.  So we began to collate the materials which might make a compatible range of book chapters. We included or approach to re-framing problems, derived from moderate Buddhism and moderate Stoicism; but excluding all extreme elements. We then compiled a chapter on the use of the E-CENT models for a counselling session, shaped by the Jungian standard structure.  And then, in Chapter 9, we presented a set of guidelines on how to incorporate lifestyle and health coaching into any system of talk therapy.  The resulting book was titled Lifestyle Counselling and Coaching for the Whole Person: Or how to integrate nutritional insights, exercise and sleep coaching into talk therapy.***

The emergence of the Sleep Book

By this stage, Renata was so engrossed in sleep science research that she could not stop.

She spent at least eighteen months, and probably more, reviewing 108 books and articles, and wrestling with the material to shape it into an elegant and useful resource for self-help enthusiasts with sleep problems; and also for counsellors and therapists who get a lot of clients with sleep problems, like insomnia.

This is how the preface of her book begins:

“Arianna Huffington had lost her understanding of the need for sleep when, in 2017, she fainted with physical exhaustion at work, causing her head to crash down on her desk as she was working. She broke her cheekbone, had to have stiches in her right eye, and it was a massive shock to her.

“A taxi driver who was suffering from a serious sleep disorder, and who was seriously sleep deprived, nearly caused the death of William Dement, one of the pioneers in sleep medicine. The driver had undiagnosed sleep apnoea (see later, or see the Glossary for definition), and had micro-sleeps (or moments of unconsciousness) as a result, when he was driving. He fell asleep at the wheel of the taxi, and Dement managed to grab the wheel of the car, as it careered into the opposite lane of the motorway.

“When Dement (2000) questioned the driver afterwards, the driver said he’d been to several doctors without any cure being offered for his sleep apnoea, high blood pressure, snoring and constant fatigue.

“’If my driver had crashed into the Columbia River gorge, the accident would have been blamed on brake failure or some other nonsense. That my death was sleep related, let alone that it was caused by obstructive sleep apnoea, would never be known.”

“With the evidence from sleep scientists becoming increasingly available to the public, we now have a chance to see how lack of sleep ravages the body, and compromises the mind, in so many different ways. One good example is this research result: When research participants had their sleep restricted to four to five hours, for just one night, the natural killer cells in their immune system were reduced by 70%!

“And there is a lot of research to show that lack of sleep makes us angrier, less happy, and prone to serious physical and mental diseases.

“People who are deprived of sleep have been shown, in laboratory experiments, to be unable to accurately assess the emotional messages on photographs of people’s faces, ranging from happy to angry.  This is because sleep-deprivation reduces our emotional intelligence. This has implications for many people working in the emergency and security services, where highly skilled assessment of human behaviour is needed, and people can be working without sufficient sleep to meet the demands of the job.

“But we live in a culture which is increasingly denying the importance of sleep. In the past Margaret Thatcher, Ronald Reagan and now Donald Trump, have denied the importance of sleep. Thatcher and Reagan paid a very high price for their denial of this physical necessity in the form of developing Alzheimer’s disease. Trump may well do too, unless he changes his lifestyle very quickly.”

Renata’s book, which was published three weeks ago, is titled: Safeguard Your Sleep and Reap the Rewards: Better health, happiness and resilience.***

Clearly, sleep science, and how it relates to mental health issues, and emotional well-being, is a subject that every counsellor and psychotherapist, psychologist and social worker should be interested in reading about, for the sake of their clients.

That’s all for now.  I hope you found this information helpful.

ABC Coaching and Counselling Services***; the Institute for E-CENT Publications***; and the ABC Bookstore Online.***